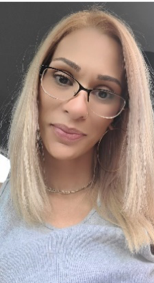 My name is Noemi Gonzalez and I am a mother of 4 and I am presently working towards a degree in addictions psychology with a minor in political sciences. I am partnered with several organizations, and I am an activist supporting the rights of individuals with disabilities. Additionally, I am a consultant for those within the disability community that are in or interested in recovery from substance use. In October of 2019 I ended up paralyzed due to an incomplete spinal cord injury (c4-7) quadriplegic and I am also in long-term recovery. However, I certainly had to make significant strides in my world to be where I am today.

Growing up around a mostly absent, alcoholic father, I experienced many hardships, as an adult, it didn’t much differ. I myself had a short-term battle with alcoholism and experimented with marijuana before deciding to “get my act together” and pursue a career in the military at age 19. Unfortunately, due to the extent of my injuries, I was eventually discharged and needed pain medications on a regular basis. I took them as prescribed, but after some time the pain relief didn’t last as long, so I saw no harm in increasing my intake every so often in order to cushion my pain. But, that didn’t exactly last long. I knew something wasn’t quite right because my body (through no fault of its own) kept growing accustomed to the increased doses. It created a tolerance that led to misuse. The misuse created a dependence that led to abuse. Yet, I was in complete denial of the explanations suggested.

See there was no way I was “addicted” I wasn’t using illicit street drugs, simply something prescribed! Upset and confused I thought “I’m not homeless, jobless, careless, or otherwise the textbook definition of an addict” until I was. My life took an unexpected, unimaginable and unmanageable dive. Although it took many years to lose everything, the warning signs were there. But, to a person who is not quite ready to see, hear, or understand what addiction is, denial is how they process it. For years I struggled with alcoholism, legal and illegal substances, battled with depression, PTSD, anxiety (to name a few), and a substance use disorder I hadn’t yet fully accepted.

Until I did, and while I was in/out of about a dozen treatment facilities, in/out of hundreds of AA and NA rooms, I ultimately made the decision on my own to completely abstain from all mood & mind-altering substances. It wasn’t long after that that I ended up paralyzed and a full-time wheelchair user. The one thing I wished I had read the warning label on “opioid pain medications” had been offered to me as I would now and for the rest of my life experience chronic pain all over again. I knew I had barely escaped with my life when I wasn’t physically disabled, much healthier, and with full access to resources so I couldn’t imagine putting myself through that again, much less my body. It was the best decision for the 2nd time around that I’ve ever made for many reasons but one, in particular, is perhaps the most prominent. I’ll explain shortly…

Addiction, now commonly referred to as a substance use disorder (SUD) is generally considered a disability since it is an impairment that affects brain and neurological functions, regardless of whether it is past or present. Addiction has been a part of human behavior for thousands of years. Disabilities have also been an ancient part of society as well, yet the critical link between the two is far too often overlooked. SUDs within the disability community are more common than people realize, although they aren’t always immediate nor apparent.

The Process of Addiction:

Addiction to substances usually develops over an extended period of time but can occur rapidly. Although individual experiences will differ and NOT EVERYONE who uses or even abuses substances ends up with a SUD, this was in fact the pattern to which my substance use turned into a substance use disorder:

Addiction & Disabilities have a complex relationship that tends to go hand-in-hand. People with disabilities are more likely to experience SUDs compared to the general population, they are also less likely to receive treatment for it. Conversely, people with SUDs are more likely to become physically disabled, either through accidental incidences or side effects of prolonged use. Mental health can also cause or result from a SUD. The symptoms of both mental health & SUDs can often masquerade each other causing a misdiagnosis, resulting in lack of proper treatment; if any.

People with physical disabilities are up to 4 times more likely to struggle with due to: *chronic pain *isolation *situational discomforts *lack of support *co-occurring mental health disorders *unhealed trauma and more.

*the inability to engage in recreational activities as they would like *being treated as outcasts by social perspectives *being denied certain benefits and/or opportunities *inaccessibility to appropriate prevention and treatment services.

Stats: 50% of individuals with spinal cord injuries and 50% with traumatic brain injuries struggle with SUDs. 50% of individuals with arthritis and 50% with visual impairments are classified as heavy drinkers. Some studies suggest that as much as four out of ten people with disabilities struggle with substance abuse. It’s also common for individuals who acquire a disability later in life experience trauma and depression and self-medicate with drugs or alcohol as a result. There are close to 5 million disabled Americans currently suffering with SUDs­— some are doing so in complete silence; others are watching in complete silence.

Enablement by family members, caretakers, physicians, and/or the community is also a contributing factor to abstinence. People can sometimes ignore the warning signs, feeling sorry for them not “blaming them” for self-medicating. Disregarding a person’s dependence can create further denial on both sides.

The Stigma that’s associated with addiction can make it difficult to reach out for help. People become apprehensive that it’ll reflect poorly on their medical records when speaking with health care professionals or concerned that they’ll be restricted of other important medications. Another worry is that it may alter perceptions and relationships with family, work, school, church or community services. Admitting that support and possible intervention is needed can be considered a weakness for not being able to “manage it on our own” when in fact it takes an incredible amount of courage and strength to not only admit having a SUD, but committing to treatment.

Inaccessibility: When the decision to seek treatment is finally concluded, having that door slammed shut can not only create a sense of regret, but could potentially send a person spiraling deeper into their addiction. It is no secret that those with physical, invisible, and/or mental health disabilities the barriers can be more frequent— having a greater impact on their lives. Unfortunately, treatment facilities for substance use are also out of reach to the disability community. One of the hardest, yet bravest things a person can do is admit when they need help, but it’s especially hard for those wrestling with the thought of entering a program.

The truth is, fully accessible treatments facilities are scarce. Some, though not many may have ramps, but upon entry, accessibility ceases. Their hallways aren’t wide enough for wheelchair users, uneven flooring or carpeting also makes it difficult to navigate. Oftentimes they do not have working elevators or use wheelchair lifts as storage spaces. Patient rooms, bathrooms, showers, etc. are inaccessible as well. Therapy, dayroom, or meeting area doors/doorways aren’t accessible. They do not provide assistive technologies for the deaf or hard of hearing nor the blind or visually impaired, ASL (American Sign Language) interpretation, nor materials in braille.

How then, is sobriety to be achieved? In order to receive life-changing preventative tools, adequate professional support, and effective coping techniques accessibility to inpatient and outpatient treatment centers is vital. THIS is perhaps one of the most crucial starting points for those that have an unmanageable reliance to substances. It is also significant for those who may be on the verge of a relapse (having the urge to use), yet would rather seek support.

People from all walks of life can struggle with addiction, they can equally recover from them. Everyone deserves a 2nd chance at life to pursue their passions and achieve their greatest potentials. For those with SUDs that also have a disability, it takes acknowledgment, acceptance, and accessibility! Had I chose to not remain abstinent, I don’t know that I would have had access to recovery. I may not have ever written this.

Did you like this article? Are there other topics you’d like to see us publish on? Do you want to apply to be a guest blogger? Please take our quick, 3-question survey and let us know what you think!